The cryptocurrency market continues its slide downwards, hitting its lowest level since early February. It has now sunk to a total value of $1.24 trillion, having stood at $1.42 trillion only a week ago. This represents a decline of just over 12%, with most of the top altcoins falling by higher percentages.

However, if you’re a believer in the long-term viability of crypto, then the market falls only ever provide discounts. Accordingly, we’ve picked the 5 best cryptocurrency to buy at low prices. This mostly covers coins with an absolutely low price, but it also includes a couple which priced low compared to their potential long-term value.

Most major models of bitcoin’s price suggest that it’s grossly undervalued right now. The stock-to-flow model — which compares new bitcoin minting with its current stock — suggests BTC should be closer to $100,000 than $20,000.

Bounce, or break, that is the question pic.twitter.com/qJyyXFSIIw

Likewise, bitcoin’s 11-year price history indicates it should reach $100,000 by the end of year. At the same time, a recent survey of 42 cryptocurrency researchers and executives found that 61% of them believe BTC is undervalued. They also, on average, expect a price of $66,284 by the end of the year.

In other words, bitcoin is cheap compared to where many expect it to be. This is why it appears among the 5 best cryptocurrency to buy at low prices.

Given its association with the controversial Bitfinex exchange, LEO Token (LEO) may not necessarily be a popular choice. However, it’s the only top-50 cryptocurrency to rise significantly over the past 24 hours and week. 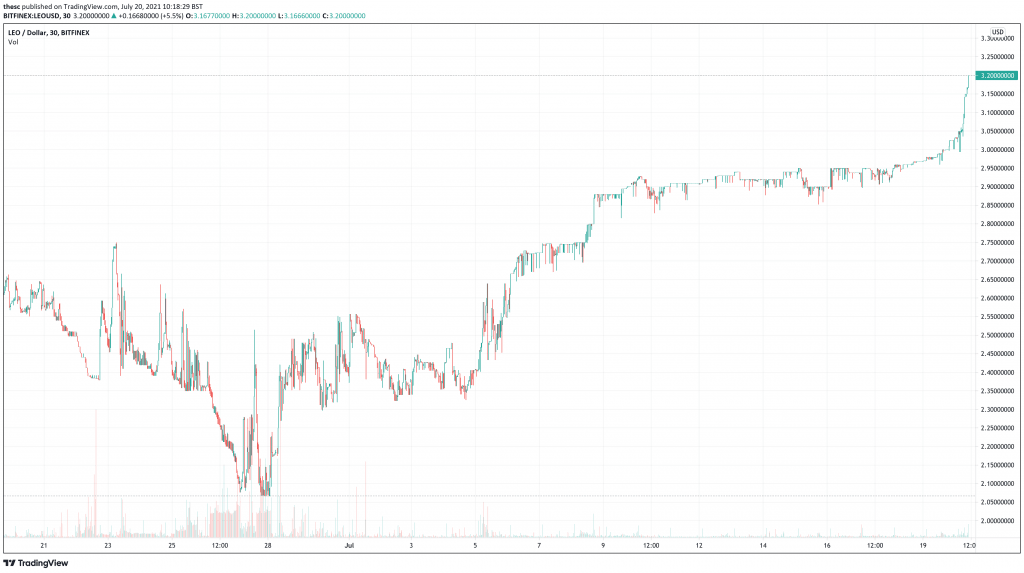 For those who aren’t familiar with LEO, it’s the native utility token of the Bitfinex exchange (owned by iFinex, which also owns Tether). As with Binance’s BNB, it provides Bitfinex users with discounts on trades.

Being a verified user on #Bitfinex brings HUGE advantages, such as:

Access to UNUS SED LEO and its trading discounts

Stable and utility tokens deposits and withdrawals
PLUS more!

At just over $3, LEO is certainly cheap. That said, the only problem with it is that it’s not entirely clear why it has been rising so strongly, particularly when the rest of the market is down. Data from Nomics shows that Bitfinex has enjoyed rising volumes over the past year.

This may suggest an increased demand for LEO. However, the volume has certainly declined in the past couple of months, implying weaker demand for the cryptocurrency.

Still, with the rest of the market tanking, LEO may be only one of the few chances for short-term gains right now.

Another cryptocurrency that has bucked today’s trend is Dash (DASH). It’s up by nearly 5% in the past 24 hours, at the relatively low price of $119. On the other hand, it remains down by 6% in the past week and 21% in the past month, following the rest of the market. 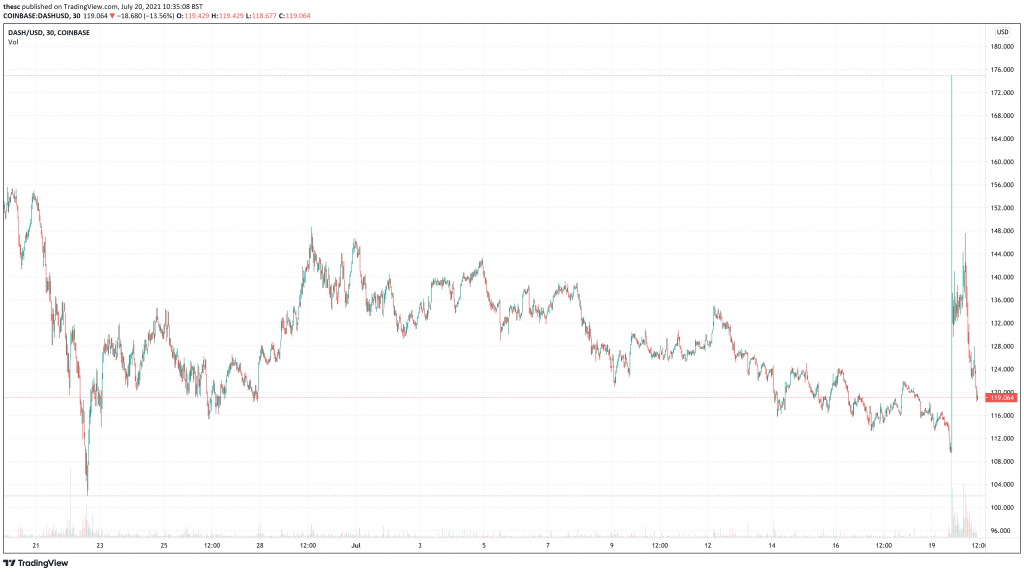 Compared to an all-time high of $1,493, DASH is certainly very cheap right now. In fact, it’s one of the few major coins that didn’t break its December 2017 ATH during the recent bull market. It’s currently 92% below this ATH, suggesting it has plenty of space left to rise if another bull market picks up.

And while Dash isn’t as widely discussed as the biggest cryptocurrencies, it continues to attract new partnerships. Most recently, it announced a deal with Naijacrypto to launch the first cryptocurrency exchange in Haiti.

Dash has seen significant growth in economically affected markets such as Venezuela. It is this experience and knowledge we will leverage to enter Haiti. Naijacrypto is the first cryptocurrency exchange to service the Haiti market. 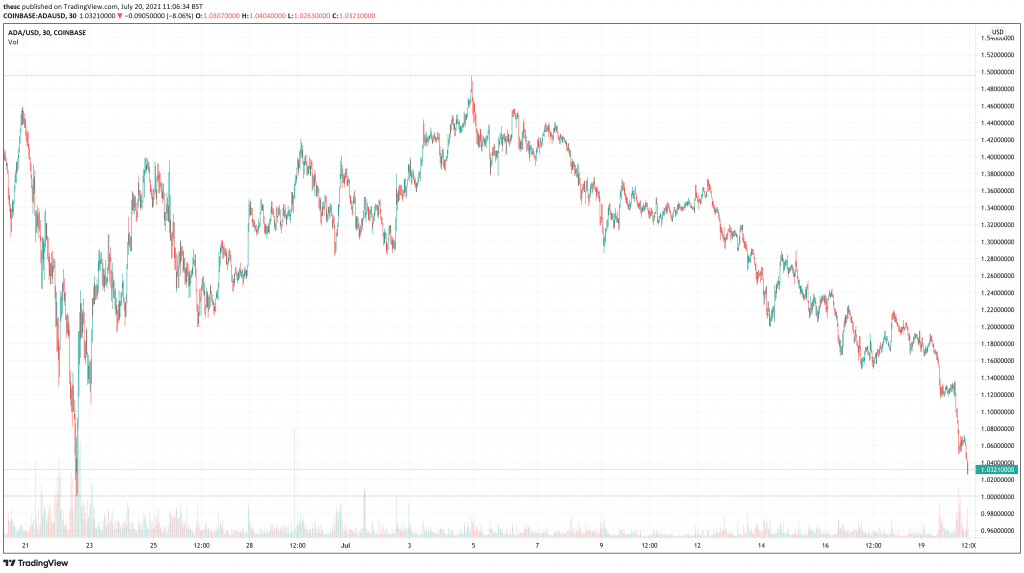 These falls may be steep, but they arguably make ADA one of the best cryptocurrency to buy at low prices at the moment. According to Blockchaincenter.net, it is the fourth best-performing cryptocurrency over the past 90 days. This is due largely to it rising after May 12, when the market fell following Tesla’s rejection of bitcoin.

Cardano’s status as a proof-of-stake blockchain helped it to rise to new heights after the outgoing bull market began its decline. And it’s actually one of the few major platforms with some big positive news to look forward to in the coming weeks. This is the arrival of smart contracts, which are due to launch at some point in August. Once they do go live, Cardano will effectively become a fully-fledged dApp platform and likely enjoy increased adoption. In turn, ADA will leave behind its current low price. 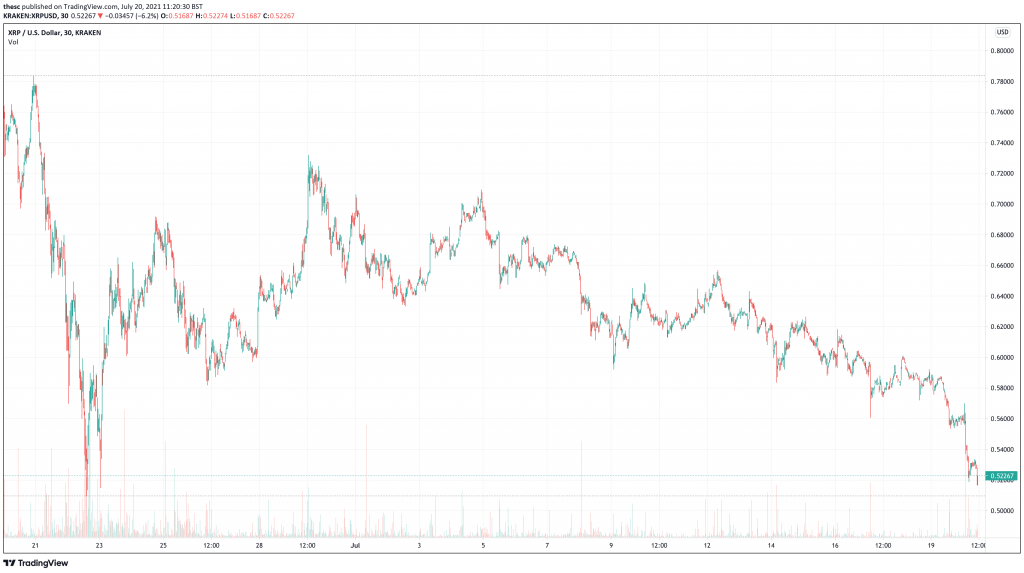 There are two things that make XRP one of the best cryptocurrency to buy at low prices right now.

Firstly, Ripple’s ongoing case with the Securities and Exchange Commission continues to go well. Most recently, two SEC commissioners submitted a letter to the case’s presiding judge, declaring that Ripple didn’t have fair notice from the SEC to the effect that XRP might be considered a security. This letter might make a settlement or dismissal more likely.

More clear: Imagine you are the Judge deciding whether Ripple had “Fair Notice” it was violating the law and you look in the file and see a letter from 2 out of the 5 SEC heads stating essentially that “Not only Ripple didn’t have Fair Notice, NO ONE had or has Fair Notice.” ?? https://t.co/SQejXo7lfA

Secondly, Ripple and XRP can boast more adoption than many other coins and platforms. Ripple announced a partnership with Egypt’s largest bank in May, while it also revealed a move into tokenisation at the beginning of this month.

Taken together, such developments put XRP in a position to rally strongly if and when the SEC case is settled in Ripple’s favour.

What is a Crypto Aggregator? Taking a Look at Orion Protocol

As the cryptocurrency and blockchain technology industry continues to grow while being endorsed by more celebrities and some of the top S&P 500 companies, there...

If you’re looking to trade digital currencies from the comfort of your home, you’ll need to ensure that you are using a platform that comes...

eToro offers its clients a wide range of trading tools, including copy trading. If you are looking for a safer way to enter the world...

Altrady Review: The Only Cryptocurrency Trading Tool you Need?

Anyone who is remotely interested in trading is in search of the best tools to simplify the process. The more features a tool can pack,...